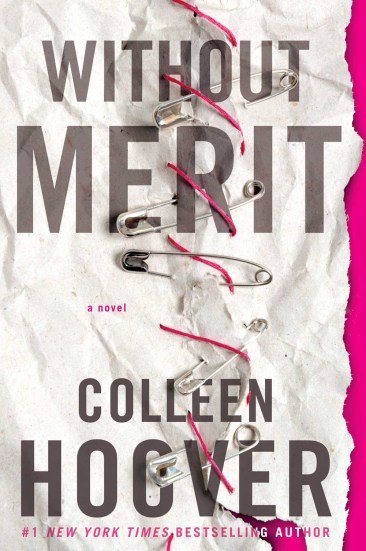 Without Merit is due for publication on October 3, 2017.

Merit, a 17 year old senior in high school, has quite the interesting life. Merit’s family of seven is quite possibly the most oddly dysfunctional family I’ve ever had the pleasure of reading about in a book. Merit and her twin sister, Honor, do not share any special twin connections or abilities to read each other closely. In fact, they barely have anything to do with one another and are like polar opposites. Their brother, Utah, only a year older than the twins, appears as perfect and wholesome as they come, which drives Merit crazy. Their rarely-present, laid back father lives with his second wife, Victoria, who was his younger mistress and the reason his first marriage failed. Their son, Moby, provides some rare moments of happiness to those around him, despite his mother monitoring his every move rather than allowing him to just be a curious four year old. The only family member that Merit feels a connection with and wants to spend any time with is Moby, who is easy to love. Here’s the real kicker: Merit’s mother, who is also a Victoria, lives in the basement and refuses to leave due to her social anxiety and general sickness following a struggle with cancer a few years prior. Merit, Honor, and Utah take turns bringing her meals and checking on her. Talk about a strange living arrangement!

Perhaps the oddest thing about the Voss family is that they all live together in an old converted church, which they have named Dollar Voss, because it is split into four living quarters. And the reason they are living in an old church all boils down to the fact that their atheist father, Barnaby, didn’t like the old Pastor’s Labrador retriever, Wolfgang, barking at all hours of the night. Therefore, he bought the church out from under Pastor Brian, forcing he and his dog to move out and leave Barnaby with peace and quiet – or so he thought. The Voss household, readers will find out, is anything but quiet.

Merit is out finding used trophies for her collection one day, when she meets Sagan. The initial meeting leaves her feeling something she hasn’t ever felt before – happiness and excitement. Any hope she has fizzles, however, when she finds out that Sagan is Honor’s boyfriend. Of all the luck! Merit, who has never been in love before, has to fall hard for her twin sister’s boyfriend. What’s worse is when she realizes that Sagan is living in the room right across the hall. Though she tries to avoid him and ignore her feelings of attraction, its impossible.

Meanwhile, Merit stops attending high school unbeknownst to her own father. She goes for days without speaking to anyone in her household, and they hardly notice. She doesn’t think there is anything out of the ordinary about her behavior; she’s just doing what feels right for her situation. After a serious suicide attempt, Merit’s family and Sagan encourage her to seek help. Near the end of the story, Merit realizes that she has depression, which makes sense to readers who have been seeing the signs in Merit’s behavior since the beginning. This story is a unique look at how the affects depression can change an entire family. Hoover does a wonderful job of bringing light to mental illness without focusing completely on the issue. She brings it into the story to add another layer to an already heartbreaking, yet moving story of a family sticking together no matter the obstacles.

Despite all of their faults and mistakes, Merit’s family members are lovable in their own way, as readers learn more about why they are what they have become. When Merit takes the time to look at them with a new perspective, thanks to some help from heartthrob, Sagan, who lives across the hall, and energetic, Luck, her stepmother’s younger brother, she realizes that maybe she is part of the problem. And things she thought were true about Utah, her father, her mother, her stepmother, Honor, and even Sagan weren’t exactly the way she pictured. Sagan and Luck help her to have the courage to seek help, and her relationships with them are stronger for it.

Hoover’s young adult, stand-alone novel is best for a mature audience due to language and references to drug usage. Though it alludes to sexual scenes, the romance is not explicit in any way. Fans of Liane Moriarty and JoJo Moyes will enjoy Colleen Hoover’s novels. Without Merit, in particular, would be enjoyed by teens and adults alike. This was my first experience with a Colleen Hoover novel, and I look forward to reading many of her other books.

Thank you to Atria Books for the advanced review copy.

One thought on “Without Merit by Colleen Hoover”

🧹Book Review: The Maid 🧹⁠
Gaze upon this gorgeous cover. It's breathtaking! I'm reading my way through the ACOTAR series, and I now have the final book remaining. I can already tell I'm going to have a book hangover after it ends. This series is wonderful! ⁠
I'm really enjoying this series and will be sad to see it end. I'm so glad I've left my comfort zone of romance and thrillers to read some fantasy! This series has it all - romance, adventure, thrilling action, you name it! Highly recommend...oh wait...I am one of the last ones to read it! Highly recommend anyway! ⁠
★★SURPRISE COVER REVEAL★★
☕January Sipsby Tea Box☕⁠
Why, oh why did I wait so long to start this amazing, lovely, unforgettable series?! ⁠