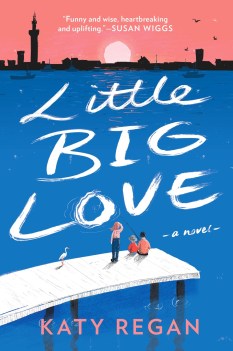 A modern family drama unfolds in alternating points of view of authentic voices between a 10 year old named Zac who likes to collect facts and cook, his single mother, Juliet, and her father, Mick.  Juliet and Zac live on Harlequin Estate in Grimsby, a seaside town in England which was a major fishing port. Zac’s father, Liam, left under mysterious circumstances after the tragic death of Juliet’s brother, Jamie, ten years ago. Only Mick, a recovering alcoholic and retired fisherman, knows the truth, but he hides behind grief, guilt, and his opinionated wife. Juliet drowns her sorrow with alcohol and food, and she and Zac have become overweight, causing Zac to be bullied. When the bullying at school escalates, Juliet is determined to get Zac healthy and happy. Convinced it will please his mom, Zac’s mission, a secret with best friend Teagan, is to find Liam. Soon, finding Liam becomes Zac’s top priority, but when the truth is revealed, there’s no going back, no matter the pain it brings. VERDICT: Fans of Jane Green and Susan Wiggs will enjoy Regan’s debut novel with strong family bond that explores the age-old question of what if and the aftermath of one poor decision.

One thought on “Little Big Love by Katy Regan”

These Silent Woods by @kimicgrant is a fabulous story, and one of my top reads this month. I couldn't put it down. Both the atmospheric writing and well-plotted character development were amazing! If you haven't read this yet, I would highly suggest you add it to your TBR. ⁠
❤️📚 Library Book Haul 📚❤️⁠
🐄🌳 Olympus Texas by @staceyrswann 🌳🐄⁠
🔥 A Court of Silver Flames 🔥⁠
The Family by @naomikrupitsky ⁠
🧹Book Review: The Maid 🧹⁠