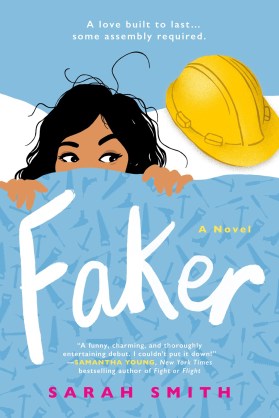 Faker delights readers with a multicultural office romance that developed from two coworkers who really can’t stand each other…until they can’t stand being away from each other. Hawaiian born Emmie Echavarre knows how to fake her way through many things, especially her days in the office at Nuts & Bolts, a power tool company full of men. Being one of the few women in the office causes her trips to the warehouse to be anxiety ridden. Her friends know her as easy going and fun but at work she fakes a tough persona, placing a no nonsense barrier between herself and her coworkers.  One coworker in particular, Tate Rasmussen, an all American white boy compete with curly blond hair and burly physique, has always been hostile with Emmie, scowling at her from his office where she has full view of his perfect biceps and curly locks. Even though he’s ridiculously handsome and swoony, Emmie forces herself to dish out the curtness and coldness right back to him. When the two are placed on a charity work team together to build a house, things heat up and scowls and grimaces turn to kisses and smoldering looks. Turns out neither Emmie or Tate are as bad as they thought each other were. Thus begins quite the adventure of a relationship, including an unforeseen emergency surgery & hospital stay for Emmie and a tension filled high school reunion for Tate. It’s also filled with some laugh-out-loud moments and tender moments between Emmie and Tate once his rough exterior is peeled away. Hang in there, readers, you’ll love it all the way to the end. Fans of Helena Hunting’s The Hating Game and Christina Lauren’s rom-coms will enjoy this debut romantic comedy from Sarah Smith. Thanks to Berkley for the advanced reader copy in exchange for an honest review.