Some people would call Clementine Abernathy a criminal. She considers herself a modern day Robin Hood, who steals from the rich and gives to the poor. Not exactly on the up-and-up, but she knows what it’s like to lose everything. Her latest heist involves swiping a priceless Van Gogh from its owner, who’s supposed to be an egotistical trust-fund brat.

Turns out Jack David is a sexy, kind-hearted man…and Clementine is in trouble. Falling for her mark would make her the World’s Dumbest Conwoman, but Jack is charmingly persistent, always singing sweet songs in her ear. And that earth-shattering kiss? She never stood a chance.

Now she’s imagining a fresh start with this dashing man, but that means telling Jack about her past. And other nefarious sorts are after the same painting. Too soon, Clementine learns what it means to risk it all for love.

A small-town girl at heart, Kelly Siskind moved from the city to enjoy the charm of northern Ontario. When she’s not out hiking with her husband or home devouring books, you can find her, notepad in hand, scribbling down one of the many plot bunnies bouncing around in her head.Her novels have been published internationally.

Don’t Go Stealing My Heart takes place in a tiny town in Nebraska called Whichway which is famous for its annual Elvis festival. Whichway’s population explodes each year as the festival kicks off, filling up with Elvis tribute artists of all ages, shapes, and sizes. Skilled con artist, Clementine, is sent to Whichway with one purpose: to steal a signed Van Gogh painting from the wealthy David family. She’s not looking forward to the time she’ll have to spend in town in order to get close to Maxwell David and ascertain where the painting is kept. She’ll be posing as a music producer, in Whichway to judge the Elvis singing contest. But on the way into town, she stops to help a stranded motorist, putting to use her praiseworthy mechanic skills. The stranded motorist, Jack, is handsome and she finds herself wishing they had more time together.

Clementine Abernathy has devoted her life to helping others who are unable to help themselves, hoping no one has to go through what she did when she was a child. She found her father dead when she was 9 and lost her mother soon thereafter to a life of addiction. At the age of 14, rather than spend anymore time in the dangerous, scary foster homes she was placed, she started training with Lucien to  become the skilled con artist that she is today. Some would call her a criminal, but she’s more of a modern day, female Robinhood. She steals high dollar items from rich people and gives the money to charity. Her most recent project is funding an orphanage in India. She keeps to herself, as her lifestyle doesn’t allow for friends or relationships other than her handler, Lucien, who is like another father to her. Her bearded dragon, Lucy, is her other best friend.

Maxwell “Jack” David is the CFO of David Industries, a lens-tech invention company that employs 3/4 of the population of Whichway. He moonlights as an Elvis tribute artist, having won second place last year in the contest. He has his eye on the prize this year, especially since his father is very sick and would love to see his son win. When Clementine crosses paths with Jack again, she quickly discovers that the stranded motorist that she has been unable to stop thinking about is one Maxwell David, the man she must get close to in order to steal his family’s prized Van Gogh painting. Plot twist! To complicate matters, she and Jack have more in common than she imagined. He even has a bearded dragon named Ricky Ricardo, the perfect match for her Lucy, also named after the classic show. Jack’s under a lot of stress at the moment: trying to keep his father’s illness a secret, attempting to save his family’s company from an imposter, and trying to win the singing competition. Now all he can think about is the new girl in town, Clementine, who seems to be everywhere he goes. Not that he really minds spending time with her at all.

How can Clementine pull off the heist she was sent to complete? Is it worth losing the one person she has ever fallen in love with to finish the job?

Fans of Christina Lauren and Helen Hoang will enjoy this light-hearted romantic comedy for it’s endearing characters and twist at the end.

Thank you to Ink Slinger PR for providing me with an early review copy of this book. 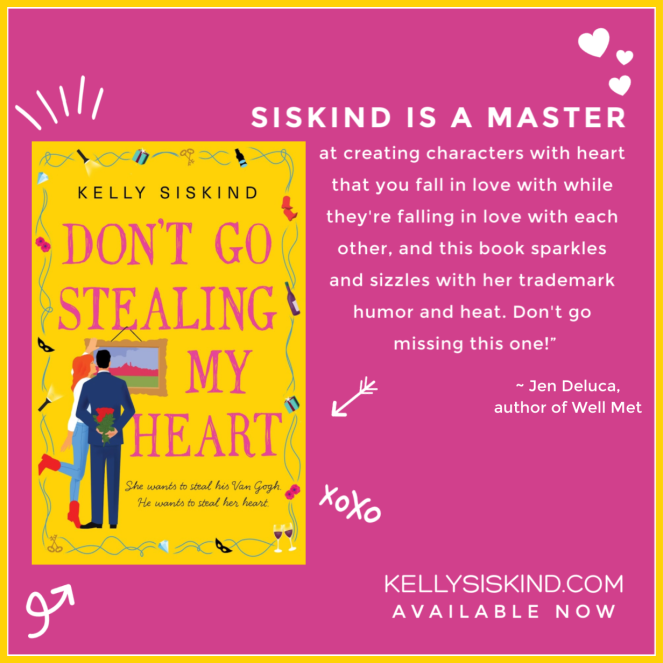