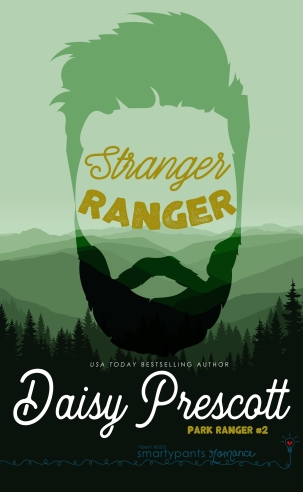 New park ranger Daphne Baum is a reformed good girl. Breaking free from her overbearing family as soon as she turned eighteen, she’s been on her own ever since. The life of a park ranger, moving from park to park, suits her just fine. Though still a rule follower, she’s okay with a little sin in her life.

Every generation of Hill men has its black sheep. The general consensus among the family is that Odin Hill is the lucky bastard this go around. At seventeen, he blew out of town like an angry tornado only to return fifteen years later withdrawn and secretive. Living like a recluse in the hollows in the Smoky Mountains, he’s happy to keep to himself and is content to let locals believe he’s the town weirdo. Odin prefers the company of his pet pig to the nosy citizens of Green Valley.

When Daphne discovers Odin might be committing nefarious deeds on park land, she vows to find out the truth behind the handsome, yet chaotic, loner. Will the stranger help the ranger discover the difference between being good and doing the right thing? Or will they find themselves on opposite sides of love?

Stranger Ranger is a full-length contemporary romance, can be read as a standalone, and is book #2 in the Park Ranger series, Green Valley World, Penny Reid Book Universe.

Coming to Kindle Unlimited on May 25th!

Where else but at the Green Valley farmer’s market would a girl come face-to-face with a demigod, a “Vegetable Thor”, a tall, handsome, bearded man selling exotic vegetables which he grew himself? Since meeting him initially and trying some of his spicy turnips, Daphne can’t stop thinking about Odin Hill. She finds herself keeping an eye out for him, hoping to run into him again.

Daphne Baum is a new park ranger in the Great Smokey Mountains, having moved to Green Valley, TN four months ago. Before that, she was pretty nomadic, moving from park to park and never quite settling down roots during any of her previous park ranger experience. Daphne teaches interpretive nature classes and does school visits, and she generally enjoys her job, even if she is sort of a self-declared hermit. But she doesn’t intend to stay in Green Valley forever.

Odin Hill is seen by many as the town oddball. Some might even say he’s in the same league of odd as Cletus Winston. The Hill family has lived on a homestead between Tennessee and North Carolina for generations, since well before there was even a national park established. He’s used to being called a “hillbilly” and “Jolly Green Giant,” by the nosy people in town, but he brushes it off, because he’s comfortable in his own skin. Odin lives in a remote cabin with his pet pig, Patsy Swine. and his dog, Roman. He likes to take Patsy for daily walks, and he spends his time growing vegetables and foraging for apples and fungi. Once a famous chef, Odin now prefers a quiet, slower paced lifestyle with less human interaction where he delights in simpler things.

But then he meets Ranger Daphne Baum and he doesn’t mind her company at all. Though he is ridiculously hot and she feels all the feelings in his presence, Daphne thinks Odin is up to no good and she suspects he is using the park lands for egregious purposes. Daphne knows its probably best to not become involved with strange, endearing Odin. The more time they spend together (like visiting hidden apple orchards), however, Daphne realizes that its too late…she’s in deep. Daphne hasn’t yet shared the whole painful story of her past with Odin, which causes a bit of an issue. Will Daphne be able to earn and keep Odin’s trust when a part of her past strolls into Green Valley unannounced and she’s forced to spill the whole truth?

Readers will fall in love with Odin and Daphne for their unique, and somewhat oddball ways. Ranger Jay and Olive from the first book in the series, Happy Trail, make an appearance, which is an added bonus. I really hope there are more books coming in this series – it’s one of my favorite Smartypants Romance series. There’s just something about the small town of Green Valley and the Great Smokey Mountains that is romantic and peaceful. I would love to escape there.

Thank you to Smartypants Romance for the early review copy of this title. One thought on “Stranger Ranger by Daisy Prescott”

COVER REVEAL
THINGS WE HIDE FROM THE LIGHT⁠
Thank you, partner @bibliolifestyle & @williammorrowbooks for the paperback copy of THE GOOD DAUGHTER by @karinslaughterauthor #partner #gifted⁠
★★★BOOK ALERT★★★⁠
💐 Book Feature 💐⁠
Thank you so much to Once Upon a Book Club Box @onceuponabookclubbox for the amazing giveaway of the VIP box featuring THE ROUGHEST DRAFT by @wibbs_ink , shown here in the "Write Your Own Story" box! What's better than reading a great romantic comedy...and it's a book about authors and books!? OUABC is about connecting readers by opening useful and unique gifts that bring the story to life in a whole new way! The gifts and the packaging for this one are so cool - just wait until you see what's in the smallest package! Loved it!⁠