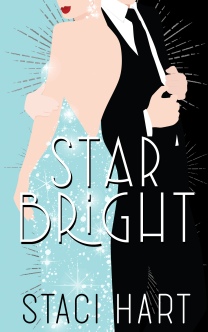 If this book doesn’t bring you Gatsby vibes, I don’t know what will! Star Bright is a new contemporary standalone romance novel by Staci Hart that brings all the glitz, glam, and lavishness of the social lives of a super rich group of trust fund kids. This is the first book in the new Bright Young Things series.

The Bright Young Things are the talk of the town, holding elusive, extravagant (over the top, really) themed costume parties all over New York City. Everyone wants to be at the parties, but only an elite group and their plus ones are allowed entrance. Unfortunately, the story hungry media and the arrest hungry police commissioner are watching the Bright Young Things like a hawk, hoping to expose the organizer and wealthy benefactor and find out who Cecelia Beaton really is. Only a few of the insanely rich young people in the circle know Cecelia’s true identity, and they are sworn to secrecy. A writer for Vagabond magazine, Levi Hunt, has a shot at the career of his dreams, if only he can infiltrate the Bright Young Things parties and uncover the true identity of Cecelia Beaton. Levi can’t believe his luck when he attends his first party as a plus-one of his friend Ash. Levi is completely out of his element, surrounded by rich kids who have never wanted for a thing. After his parents were locked up for drugs when he was just a young boy, Billy, a kindhearted cop took him in as a foster kid and has been his “Pop” ever since. Now, Levi tries to repay the kindness by taking care of an aging Billy and making sure he has what he needs.

Levi’s gorgeous looks and charm, however, cause him to fit right in with the elite party-goers. His sole purpose is to get the inside scoop, write the story, and question people so he can find out who Cecelia is. However, his plans are blown completely out the window when he meets Stella. Stella Spencer is easily the most beautiful and intriguing woman that Levi has ever met. Their instant physical attraction to one another smolders, even if they are both hiding secrets. Stella has no idea that Levi is writing a story on the Bright Young Things and Levi has no idea that Stella is Cecelia. Soon, Levi has to make a choice. Will he choose the career of a lifetime or the woman of his wildest dreams.

This book is the perfect mix of sweet, sassy, and sexy. Levi and Stella are fire together, but the secondary characters are also pretty awesome, especially Stella’s roommates and best friends Betty, Zeke (Zelda), and Joss. I hope to get to know them better in the next books to come in this glittering, hot new series.

Thank you to the author for an early review copy of this title.

One thought on “Star Bright by Staci Hart”