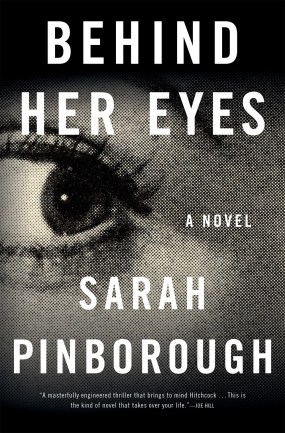 Behind Her Eyes, published by Macmillan, will be released on January 31, 2017.

This story is full of unreliable narrators (who drink…a lot) and the story switches back and forth between them with each chapter. David Martin is young, handsome, and a highly successful psychiatrist. His wife, Adele, is strikingly beautiful with a tragedy-laden past, having lost her parents in a fire at the family estate prior to her marriage to David. Enter Louise, a divorced, single mother who spends her time working as a secretary and drinking wine. Louise becomes entangled with both David and Adele, but in secret (at least Louise believes it to be a secret) from each other. She first meets David in a bar one night, spends some time kissing and flirting with him, but didn’t realize he was married. The next time she sees him, it’s when he becomes her new boss. Awkward much? One day while dropping her young son, Adam, off at school, Louise literally runs into Adele. The “chance” meeting turns into a chat over coffee and the beginning of a gratifying friendship for Louise, who mostly kept to herself prior to meeting Adele.

As Louise spends more time with Adele, she starts to question some of the oddities of her marriage to David. Why does David call to check on Adele at certain times of the day, but not allow her to have a cell phone or any money. Why does Adele keep things hidden from David? And who is this man named Rob, which Adele mentions from her past. Though part of the story flashes back to the time after the fire when Adele is in a mental institution, readers are never given specifics about why she is there. Readers will get a sense that her relationship with Rob, whom she meets at the institution, will be a huge turning point in the plot and what happened to cause such a dark, secretive marriage situation.

This story is dark and even from the outset, there is a powerful mood that something is very, very wrong about Adele and David’s relationship. The ending does a total flip and nothing that happened in the story is as it seems, once the truth is revealed. Everything is explained in the final two chapters and readers will be gobsmacked. Personally, the ending of the book changed my entire attitude toward the story. Though I very much enjoyed reading it, it took a turn toward the twilight zone at the end that I wouldn’t normally enjoy. Sorry to be so vague, but this is not the kind of story I want to inadvertently spoil for any future readers.

Behind Her Eyes is certainly unique and like nothing I have ever read in the past. Perhaps for this reason alone, and despite the ending that wasn’t to my liking, I really loved the book!  Fans of Gone Girl-type psychological suspense and authors like Mary Kubica and/or Stephen King will enjoy this book immensely. It’s sure to be a bestseller with a movie to follow.

2 thoughts on “Behind Her Eyes by Sarah Pinborough”

🐝 COVER REVEAL! 🐝 ⁠
📖Book Spotlight📖⁠
🐝 All the Little Hopes 🐝⁠
Love Next Door, an all new addictive small-town romance from New York Times bestselling author @helenahunting is now live!⁠
Coming September 7th - Never Saw Me Coming by Vera Kurian - a propulsive character-driven novel that places readers into the mind of a psychopath (unreliable narrator, anyone?!) caught in a dangerous game of cat and mouse. I loved this story! Thank you to @parkrowbooks for the early review copy of this thrilling novel. ⁠
One unforgettable night leads to an unlikely shared connection, and unlikely connections never go unnoticed by the good folks in Green Valley, Tennessee. . .